Couple more pics and some words, too 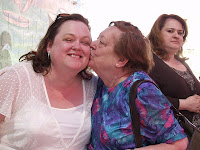 Mommy and me, at lunch (nevermind the silly look on Tracy's face) 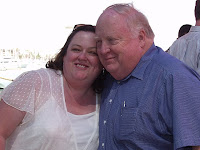 Daddy and me, at lunch

So, upon further reflection, I don't think a post about how sick I was for seven days would be entertaining. We'll just say this: I started feeling as though I wanted to die about seven hours after the wedding (Friday) and only began to feel human again the following Friday (almost exactly a week later). I don't think it could have been food poisoning for that amount of time and I think it might have been bacterial, but we'll never know because I just kept thinking it would get better so I didn't go to the doctor. Plus, Mick is still living up in Oceanside in his condo until it's cleaned out into storage, so who would have taken me anyway? You know what's really lovely, though? I'm still having to watch what I eat because the terrible pain will return if I eat too much or eat the wrong thing. As I just said to Tracy on IM, perhaps this is God's way of telling me that He's tired of me trying to eat properly on my time table? I'm retaining water terribly, too, so I've managed to gain back all 15 pounds that I'd lost through the really sick period of this whole extravaganza and now I've had to buy new clothes for a conference this weekend because I can't wear anything that binds across my tummy. (And, with the water retention and, um, gas, everything binds across my tummy.)

Any wonder Mick's not in any rush to move in with me?
Labels: Wedding recap

Shannin said…
What beautiful photos! You look so, so happy. What a perfect day for a wedding, too. Sorry you're not feeling well - hope that's resolved soon!!
4:12 PM

Mother of Invention said…
I'm sure he can hardly wait till you can be together! Looks like you were blessed with an amazingly beautiful day..that's gotta be a good omen! You both looked fabulously happy! I'm glad for you both...and yes, he looks very handsome in his uniform!
6:07 AM

Shauna said…
oohhhh you are gorgeous. love the frock and the beaming smile :)

hoep you're feeling better soon you poor thing! xx
6:37 AM

Unknown said…
You look so pretty and happy!

p.s. your dress is GORGEOUS. Summery and sophisticated but sweet too. You look absolutely radiant in it, you have a smile that lights up everything around you. And the pictures with your parents are making me cry!
2:36 PM

Mother of Invention said…
BTW, I love the new look at your site! Very pretty and clear!
4:27 AM

Lys said…
CONGRATS DENISE!!!! I'm so happy for you and Mick and your pictures are stunning. Absolutely stunning!

rdhdprincess said…
Ugh, I hope you're feeling better soon dear. You look absolutely beautiful in your wedding photos! So pretty! I love your dress.
I'm sure you are right about not saying anything to hurt the kids feelings, I hadn't even thought of that. Shame on me! You are such a good influence. Mwah!
2:56 PM

Xena said…
You are so beautiful and radiant, and he looks so happy too. Congratulations, and I hope you are feeling better soon. Blessings to both of you.
6:20 AM