Children, the Internet, and why 2% is fine for milk but not for college

I've never written about most of the training I received to become a CASA. Some of it was legal (procedural). Some of it was related to communications (how to properly write a court report). Some of it, though, was gut-wrenching, and that was all about how to spot abuse, how to distinguish between abuse and non-abuse (here's a hint: acceptable parental punishment does NOT leave scars or bruises), and just a general primer of the ways that adults can damage children. Those evenings were always painful and I generally came home and cried when I thought about Man's capacity to hurt others who are weak (children, the elderly, pets, the disabled).
When I became Alcott's CASA, I purposefully created a false name for him and knew that I would never post pictures no matter how adorable on this or any other publicly-accessible website. No, I don't think that anyone would hurt my boy or his siblings based on pictures I post here, but I can't say with 100% certainty that they wouldn't and I just won't take a chance.
Every day (it seems) I read or hear about someone who was taking inappropriate pictures of young, male athletes and posting them to a pornographic website. Or the disgusting excuse for a man who was going to child care centers to photograph children of both sexes on the playground. (And then posting them to a website promoting pedophilia.) There is no way on God's green Earth that I would ever allow my children or any children I come into contact with to be exploited that way.
I don't judge parents who post pictures of their minor children on their blogs or use their children's proper names when writing about them...but I do worry. I worry that someone they don't know will troll through their website, find a cute picture of their beautiful daughter in the bath, and do disgusting things with it. You haven't seen what I've seen and you cannot comprehend the capacity of certain people to make evil out of innocence.
That being said, posting a picture of an emancipated 18 year old is a different kettle of fish entirely. Here's a picture of Alcott's oldest sibling who just graduated from high school. In the picture, he's receiving a free laptop and printer from a fine organization dedicated to helping emancipating foster children who are going on to college. I have decided to volunteer with this group because this is my passion. Only 2% of former foster youth graduate from college in the United States: what are the other 98% supposed to do with nothing but a high school diploma (if they're lucky)? In this economy, especially in California, you cannot survive on what you will make without a college degree and, it seems to me, we are leading these precious children who are, in reality, our responsibility, into a future of minimum wage jobs and paycheck-to-paycheck existence. 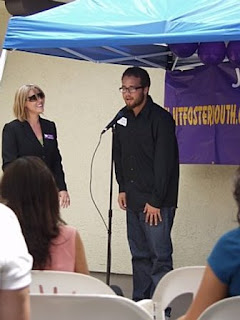 This young man and 16 others like him are shining examples of what we can achieve together. Each of them had assistance, both private and public, in getting to that dais on Saturday. Not from their parents, but from loving adults who give generously not only of their money but also of their time.
On my personal balance sheet, I know that the work I do on behalf of foster children through direct interaction, Just in Time, and my leadership of the State Public Affairs Committee outweighs any of the minor transgressions I've committed throughout the years. In my epitaph (to be written 50 years from now), I hope it will say that I put my money and my time (and my passion) where my mouth was concerning the plight of emancipating foster youth, and that I made a difference, even if only for five precious children.
In the meantime, the only thing left to say is that I'm endlessly proud of this young man. He has overcome obstacles to success that most adults wouldn't be able to handle and has simultaneously maintained a sense of humor and a belief in the inate goodness of people. And now he's in college, complete with laptop and printer and Big League dreams, and I can't wait to see where life takes him next.
Labels: Daily Goings On

Thanks for this post...it's making me even more excited as I'm scheduled for the final portion of my guardian ad litem training here in Florida next Wednesday. I have a friend that began volunteering last year, and I had heard about the program for years, and then I found your blog...and now I finally have the time to devote to this endeavor. Thanks for being an inspiration!!
4:52 PM

Jenn said…
Congratulations to Alcott's brother! How great to have an older sibling be a role model for Alcott's future.
7:50 AM