Here's the scoop about today's picture: I chose the Black Bean and Lentil soup at lunch instead of the Beef with Barley that was right next to it. They both looked good but I saw that the BB&L was vegetarian, almost no fat, and tons of fiber, so I chose that one. Sounds amazingly simple and stupid, doesn't it? But it really is that simple. And that difficult. It's not about going whole hog into this "make better, healthier choices" thing, it's about retraining my brain slowly and gently so that it sticks. 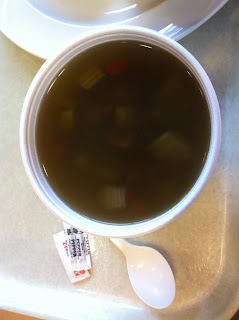 And I missed yoga because I stayed late at work to resolve problems with a product release, which made me angry and resentful. Until I got to the car in the parking garage and realized that I needed to turn off the angry voice in my head that kept beating me up for every poor choice I'd made and for missing yoga and for being stupid...you know, the basic "I suck and I'm never going to live a healthy life" loop. So, when I got to the car I decided it was time that I practice something I'd just talked to Marla (no link, because she's a secret agent) about, which is sitting quietly with your thoughts, not judging and not willing them to go away, while you focus on your breath. And you know, it worked. It took about 30 seconds for the record to stop and then a friend found me breathing with my eyes closed in my car and made me laugh with his antics, and I was free from the crap in my head, ready for a quiet evening with TCB and the furrkids.
Labels: Living mindfully Love Your Body

I am cracking up, because I first read it as you were talking _to_ Marla, and then the secret agent thing, made me wonder if you had some sort of imaginary friend.
4:36 AM