Holy cats - where have I been?

I had no intention of going MIA for three weeks, honestly. Work this time of year is just insane and I'm lucky to retain my sanity for the weeks between Christmas and mid-February, but I've got a few seconds to myself, so here's what I've been doing lately.
In spite of the insanity, I've kept my New Year's commitment to increase my exercise. At this point, I have a 60 minute weight loss workout class on Tuesday afternoons, 40 minutes of spinning both Wednesday and Thursday nights, and 30 minutes of spin followed by 30 minutes of yoga or stretching on Friday mornings. Next week we'll up the Wednesday and Thursday time to 45 minutes and to 50 minutes the week following along with adding a "long ride" one day on the weekend. (For the first weekend it's "only" 7.5 miles on a Saturday.) Remember, if you'd like to support me in my 30 mile ride to help cure Diabetes, you can go here to donate. I'm participating in the Lake Hodges 5K Trail Run this weekend, so lots of activity going on.
TCB officially starts his new job (after being unemployed for exactly four months) on Monday, and that's a good thing. It's not his dream job but it's a job and it's for a term of two years, which is a good amount of time. While we've gotten used to having him available during the day, it will be good for him to get back out into the work force, so I'm happy.
Finally, we bought a new car this weekend. Esme the Escape just turned over 100,000 miles and has sprung a mysterious but prodigious oil leak. The resale value on a car with more than 100,000 miles is next to nothing and it will cost a lot of money to find and then repair the oil leak, so we decided to spend money on a new car instead. Meet my new best friend in the whole world, Minnie: 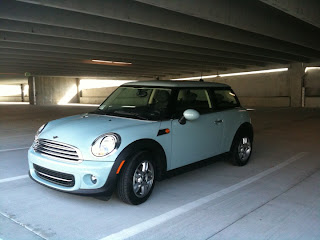 I love her so much! She has two sunroofs - one for the front seat and one for the back - and is just the zippiest car ever. It's weird getting used to being so low to the ground after driving a SUV all this time, but I'm enjoying the transition.
OK, I need to prepare for another meeting, so I'm out, but drop me a line in the comments to let me know how your lives are going. (Yes, not really doing a lot of blog reading during this time, either.)
Labels: Daily Goings On Living mindfully Love Your Body

Stooging along. Kinda busy too and not blogging as often as is good for me. Tucked up nice and cosy while sub-tropical rain drowns garden.

lisah said…
It sounds as if you are keeping your self on track which is wonderful with such a busy schedule. As to Minnie, I am smitten!
3:49 AM