Caputuring a moment in time 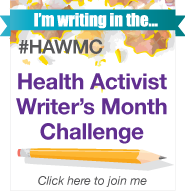 During April, I will be participating in the Health Activist Writer’s Month Challenge (HAWMC), sponsored by WEGO Health. As part of the challenge, I'll write each day about the challenges I have in dealing with Type II diabetes. My hope is that my writing will help others who might be dealing with diabetes or another chronic disease to understand that they are not alone (and also work through some of my own issues at the same time). This post is in response to the provided prompt: Health Time Capsule. Pretend you’re making a time capsule of you & your health focus that won’t be opened until 2112. What’s in it? What would people think of it when they found it?

I remember when we were trying to figure out what to put in the Senior time capsule for the Class of '85 at my high school. What really represented who we were and what was important to us? I recall a Madonna album (vinyl, of course) and day-glo jewelry going in but not much else comes to mind. Of course the idea that a few trinkets selected by the elite few in the popular clique could possibly represent over 900 individuals was ridiculous but we all played along and eventually it was buried in the flower bed outside the gym.

Trying to capture diabetes in 2012 presents a similar dilemma:  how on Earth could I possibly encapsulate the experiences of 16-30 million people currently living with diabetes in one post? Of course I can't, but I can paint a picture of what it's like for me to be diabetic in 2012 and those objects that enable me to live the life that I live.

With that, here's the contents of my capsule:

1. A Victoza pen and needle. It was such a big deal to me for so long that I would never be able to give myself injections. Would do anything to avoid going on insulin because it was some kind of moral defect NOT to be able to control my blood sugar without medication, particularly insulin. I don't know where I got that idea, but that was my belief. While at a diabetes conference last year, I realized that doing whatever I needed to in order to get my blood sugar under control wasn't a sign of weak character but rather the act of someone strong enough to do what needed to be done. In other words, I put on my Big Girl Panties and just got on with it. I went to my endocrinologist, asked for a prescription, and the rest is history.

2. A photo collage of the diabetic friends I've made, both at work and through my Diabetes and Depression support group. Until last year, I never talked about being diabetic anywhere but here. I was ashamed of being diabetic because I truly believed that it was my punishment for letting myself become obese. I felt that if people knew I was diabetic that they'd judge me for being weak and lazy, and I couldn't deal with that so instead I just kept everything inside and let it - literally - eat me alive. Fast forward a year and I have lots of friends with diabetes, and even some without, that I can share with about my disease. De-stigmatizing diabetes so that I could feel the support of others has been a critical piece of bringing me to a place of self-acceptance and even self-love.

3. A printout of the list of Twitter names for folks with diabetes who make up the DOC (Diabetes Online Community). I can't remember how I came across the first diabetic blogger on Twitter, but since that time I've added about 20 people to my following list just because they write about diabetes and their experiences in such a way that they make my diabetic life better or at least a little easier to bear. There are weekly DSMA chats, too, at which time about 100 people all talk at once about what it's like for them to live life as a diabetic or parent/significant other of a diabetic. Imagine being able to say your deepest, darkest, "no-one-will-like-me-if-they-know-who-I-really-am" secret out loud and then have more than one person immediately tweet back to say, in essence, "me, too". It's just incredibly powerful.

I hope that, one hundred years from now, if someone opens my virtual time capsule that they get a sense of the journey I'm on and the progress I'm making. I'm so far from perfect - I can't even see it from here - but I'm still walking forward and I still know that better health is my destiny. Mostly, though, I hope that they wonder what the heck I'm making such a big deal about because diabetes no longer exists in their world. I KNOW that with enough money and research and time that we WILL cure diabetes!